What is a Hallmark?

Until 1998, a Hallmark consisted of four COMPULSORY MARKS.  Since 1998 the date letter has become optional but the other three symbols remain compulsory. The symbols give the following information:

Sponsor’s Mark (formerly known as the Maker’s mark)
This shows the person or company responsible for sending the article to the Assay Office. The sponsor may be the manufacturer, retailer, importer, for example.

Standard Marks
These show the standard of fineness – the purity of the precious metal,
in parts per thousand.

The background shape shows the metal (gold).
The figure shows the article consists of 750 parts of gold by weight to 250 parts of other metals – 75% gold. This is equal to 18 carats (18 parts in every 24), the traditional way of describing gold purity. 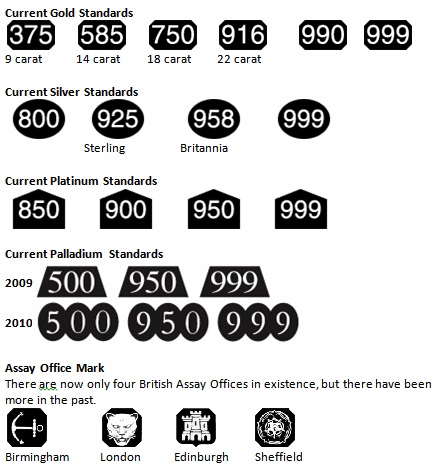 Optional Marks
In addition to the Compulsory Marks a sponsor may wish to incorporate any of the traditional marks which have been struck on British articles over the centuries and which have been recognised throughout the world.

Date Letter
This will tell you in which year the article was tested and marked.

Commemorative Marks
Special Marks to commemorate significant national events may also be added if a sponsor chooses. The Millennium Mark to celebrate the year 2000 was very popular and was applied to over 5 million articles of jewellery and silverware. The most recent commemorative mark is to honour the Queens Jubilee in 2012.

Other Marks
Other marks have been used historically for example, the Duty Mark and classic marks such as the figure of Britannia to signify Britannia Silver.